This Week in Petroleum

Since the third quarter in 2020, global demand for crude oil and petroleum products has increased faster than production, which has led to inventory draws and increasing crude oil prices. In February 2020, before the World Health Organization declared COVID-19 a pandemic, the spot price for Brent crude oil averaged $56 per barrel (b) and $51/b for West Texas Intermediate (WTI). The spot prices for Brent fell to $18/b and WTI to $17/b in April 2020 because of the significant decline in demand caused by the pandemic. Prices have since increased and are now above pre-pandemic levels because of returning demand and slow global oil production growth. In October, the price of Brent crude oil averaged $84/b, and the price of WTI averaged $81/b, the highest nominal prices since October 2014. In our November Short-Term Energy Outlook (STEO), we forecast that global liquid fuels inventories will begin building in 2022, driven by rising production from OPEC+ and the United States, which will contribute to falling crude oil prices. 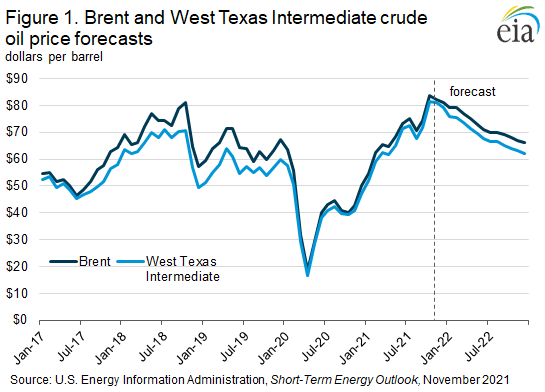 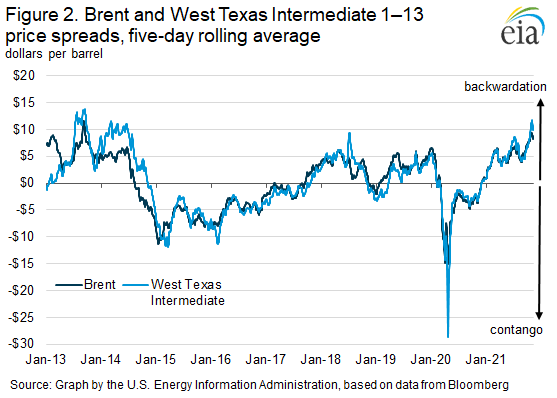 As of November 9, the Brent front-month contract (January delivery) was $85/b, and the WTI front-month contract (December delivery) was $84/b. The five-day moving average of the difference between the price for the first month’s contract and the thirteenth month’s contract (the 1–13 spread) for Brent reached $9.35/b on November 2, up from $0.96/b on January 4. The Brent 1–13 spread on November 2 was the highest spread since September 13, 2013. The 1–13 spread for WTI on November 2 was $11.66, up from $0.88 on January 4 and the highest spread since September 20, 2013. The 1–13 spreads have come down slightly recently, and as of November 9, the Brent 1–13 spread was $8.82, and the WTI 1–13 spread was $11.21. Low inventories in the United States—particularly in the transportation and storage hub of Cushing, Oklahoma, where the NYMEX WTI futures contracts are physically settled—are likely contributing to the additional backwardation in WTI compared with Brent. 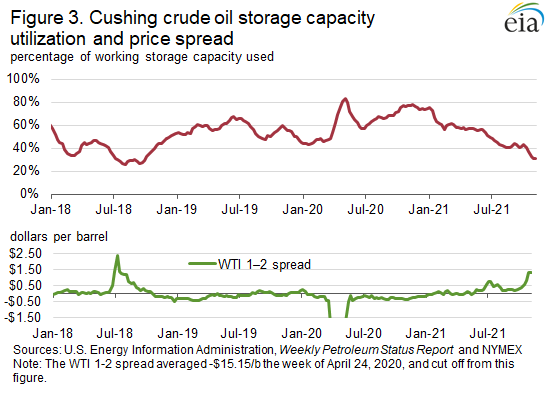 During the past decade, similarly high levels of backwardation in Brent and WTI crude oil have typically occurred only during periods of large, unplanned supply disruptions. This year, however, the significant decline in inventories and resulting backwardation are the result of a large increase in demand as well as restrained crude oil production levels among OPEC+ members. At its November 4 meeting, OPEC+ reaffirmed its commitment to maintain its scheduled crude oil production increase of 400,000 barrels per day (b/d) in December rather than increase production by more in response to high crude oil prices and increasing demand.

We estimate that world crude oil consumption has exceeded crude oil production for five consecutive quarters going back to the third quarter of 2020. During this period, total petroleum inventories among OECD countries fell by 424 million barrels—from 9% above the five-year average in June 2020 to 7% below the five-year average at the end of September 2021. We forecast global crude oil demand will exceed global supply through the end of the year, contribute to some additional inventory draws, and keep the Brent crude oil price above $80/b through December. However, we forecast that global oil inventories will begin building in 2022, driven by rising production from OPEC+ and the United States, along with slowing growth in global oil demand (Figure 4). We expect this shift will put downward pressure on the Brent price, which averages $72/b for 2022 in our forecast. 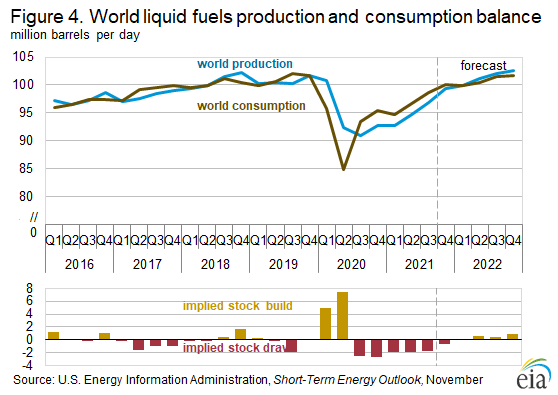 For questions about This Week in Petroleum, contact the Petroleum Markets Team at 202-586-4522.